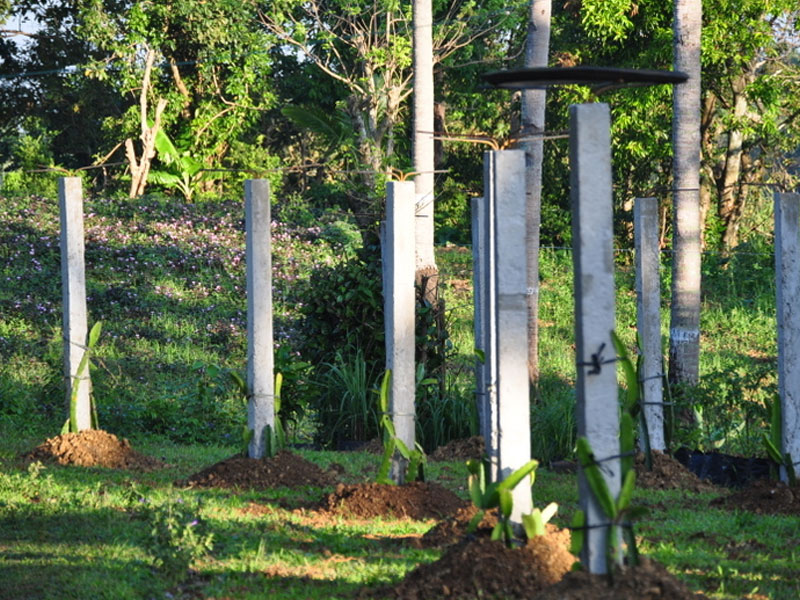 The good commercial potential of dragon fruit has prompted us to allot some space for this healthy fruit.

We used 8 feet concrete posts which we constructed ourselves using palo china scraps as a mold. The posts are reinforced by a single 12 millimeter rebar and topped with 3 sets of 10 millimeter rebars (14 inches long) incorporated in the post itself. The bent rebars will serve as the support later for the long stems of the plants. These bent top rebars were then fitted with a used tire to act as cushion to their delicate stems once they start to droop back.

We were able to produce 10 posts per batch every 2 days. The extra day was meant to allow the cement to further harden before taking them off the molds. Based on my estimates, each post costs about P500 including dragonfruit plantlets, labor and construction materials.

Each post was dug into a 2 feet deep and 2 feet wide hole. The remaining above-ground portion is approximately 6 feet. Some stones were thrown in to act as reinforcement to make sure that the posts are standing erect. Organic matter was then layered to serve as source of fertilizer. We used the composted beddings (ricehull) of our pigpens. Four planting materials were then positioned to each face of the post and topped with good soil. We water the plants every 3 days and supplement them with other organic fertilizers such as bokashi and effective microorganism concoctions. In our observation, the system seems to be working just fine because the dragonfruit are growing vigorously. We hope to have fruits after a year.